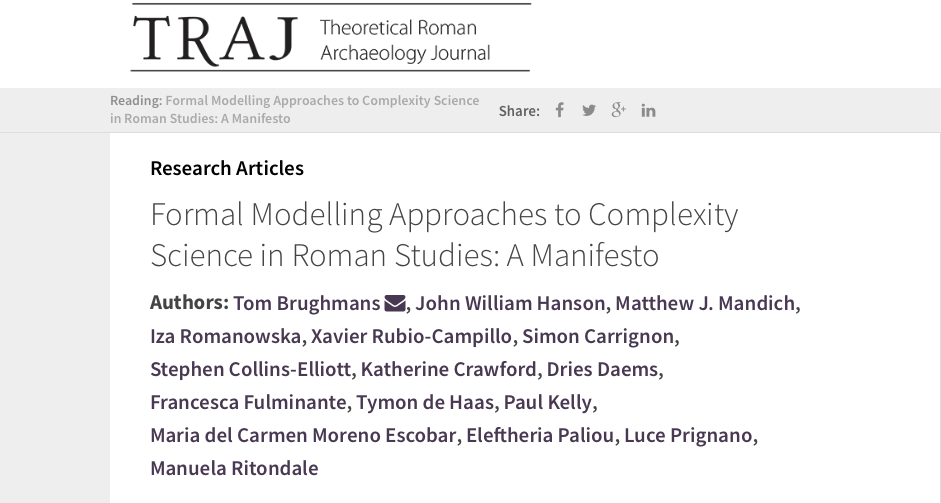 Our manifesto for complexity science in Roman studies is now published open access in the Theoretical Roman Archaeology Journal. It is the result of true collaboration between a big team of scholars passionate about this topic, with the generous support of the journal editors and the TRAC Edinburgh conference organisers. Thank you all!

Roman Studies is a fascinating and thriving field, but it could really do with a bit more formalisation of the many complex theories we produce. This manifesto aims to highlight this need and argues this can only be done through constructive and frequent collaboration between romanists with difference specialisms. Let’s do this together!

Here an excerpt, our 10 point manifesto:

A Manifesto for Complexity Science in Roman Studies

Complexity science has proven a highly constructive addition to virtually every other discipline (Mitchell 2009; Downey 2012; Chattoe-Brown 2013; Castellani 2018). The authors of this paper are convinced there is no reason why complexity science and formal modelling methods could not make equally constructive contributions to Roman Studies. We present our arguments as a 10-point manifesto for the use of complexity science in Roman Studies and for making its associated computational tools part of our ‘tools of the trade’. The statements in our manifesto are purposefully short and to-the-point to ensure their clarity, but they should be understood as strongly rooted in and supported by the subsequent sections of this paper where we showcase their applicability to particular research topics.